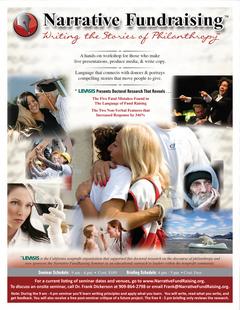 Do You Make These Five Fatal Mistakes When You Write a Fund Appeal?

​​What Tech Leaders Say About The Declining Effectiveness of Digital Appeals

Blackbaud concedes that "Every astute fundraiser will note that direct mail brings in eight or nine times more money than email each year. Email giving represents about 8% of all donations to nonprofits. Those who report giving through an email appeal remains small (only 14%) and has not budged from 2013. It is clear that direct mail giving is still responsible for the overwhelming majority of fund-raising revenue, and organizations must find ways to optimize multi-channel giving versus hyper-focusing on Internet giving alone."

M+R concludes that "at the prevailing 0.0006 response rate to online campaigns, a nonprofit has to email 1,667 recipients just to generate a single donation."

​Herschell Gordon Lewis observed: "click-through rates for Facebook ads are an almost inconceivably small 1/20 of 1 percent [0.0005]. That’s one response per 2,000 message-recipients. It doesn’t begin to compete with even the weakest conventional medium."

Maya Gasuk, who led Cornell University’s annual giving for ten years, said: "People can get easily distracted by shiny objects like Facebook and other social media tools. There’s a tendency to think the next new thing will solve all of our problems. But at the end of the day, it’s all about a conversation with donors. The core of what we do is relationship building and asking."

Beth Athanassiades of CARE told The Chronicle of Philanthropy that a hand-personalized note card fund appeal mailed to donors who gave $50 or more but hadn't given in 11 months "typically prompts 9 percent of recipients to give an average donation of $41.”

Dirk Rinker, president of Campbell Rinker, a marketing research firm, concluded that "donors are 3 times likelier to give online in response to direct mail than to an e-appeal."

​The Implication of These Trends For Leaders of Nonprofit Organizations

​​​Joan Smyth-Dengler, Covenant House's Vice President, characterized the synergy possible when direct mail and digital outreach are combined: "Our experience is that email combined with direct mail is like getting a catalog from J. Crew and going online to order."

Bottom Line: Combining traditional direct mail with online communication maximizes fund-raising results. But given that it takes 1,667 emails to get one reply, direct mail clearly remains the superior and indispensable medium for annual giving campaigns.

New York Journal reported on June 2, 1897 that Samuel Langhorne Clemens (Mark Twain) had died in London. The problem with that report was that it wasn't true. Mark Twain was very much alive and responded to the inaccurate news of his demise: "The report of my death was an exaggeration."

The same can be said about direct mail. In light of plummeting response to digital fund appeals, it would

is actually rising. This workshop will also show how direct mail can supplement online fund-raising efforts.

Manipulating the appearance of direct mail affected response rates in a 50,000-piece A/B test mailing that

the American Heart Association eventually rolled out to 1,077,067 households. Testing found that what a

smile, tone of voice, and gestures add to the content of speech, personalizing mail with handwriting added a 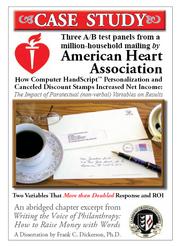 It doesn't matter what your message is . . . if it doesn't get opened

It doesn't matter that your message gets opened . . . if it doesn't get read

It doesn't matter that your message gets read . . . if it fails to ask for a gift

The Narrative FundRaising Seminar is a practical how-to writing workshop

You'll learn how to get your appeals opened, get them read, and get a response​

●    10 rhetorical superstructures of the connecting narrative moment—the heart and soul of a fund appeal
●    23 linguistic features of personal emotional connection—words that make an appeal read like a coversation sounds
●    6 linguistic features of obfuscation to avoid—words and structures that create dense, tangled, detached prose
●    6 linguistic substructures of narrative—the story materials used to build the connecting narrative moment
●    5 visual language factors that add to text what a smile adds to speech—how paralanguage lifted response 346%

●    Reads more like an academic paper than a conversation—preferring abstract concepts over making a human connection
●    Has fewer narrative linguistic features and rhetorical structures than an official document—high exposition/low dialogue
●    Lacks the three types of characters needed to build a story—protagonists, antagonists, and ensemble cast members
●    Fails to create tension with events, dialogue and imagery—doesn't make a reader scared, sad, glad or mad enough to act
●    Neglects to offer the leading role of hero to a donor—doesn't show how their gift can bring resolution to a nonprofit's story

Beyond theory to practice . . . at this workshop, you'll learn how to avoid these problems by applying what you learn. You will write copy, read aloud what you write, and then get feedback on how you applied the principles that were taught:

​​As a freshman at The Ohio State University in 1969, I remember the day the Buckeyes beat OJ Simpson's USC Trojans in the Rosebowl.

Woody Hayes, then head coach, had written a book titled Three Yards and a Cloud of Dust. That title captured the severe intentionality that marked his coaching. The Buckeyes usually scored whenever it was fourth and goal to go. But that didn't just happen. Woody was a military historian and drilled the basics into his team as if the offensive line were soldiers in a life-or-death battle. Even if you're not a sports fan, this mixed metaphor is useful. From October to December, leaders in the nonprofit sector must be intentional since most raise most of their income in the fall. The following indicates that the third quarter truly is fourth and goal to go. Consider these sobering statistics:

A steward manages the resources she or he has been given. Stewardship for a nonprofit leader means he or she must use part of those resources to raise even more. Funds not only allow a nonprofit to better serve their purpose but also to ensure their organization survives to serve another day. The datapoint above indicating that more than a third of nonprofits raise less than 10% of their annual funds through their year-end appeals is disturbing. It shows that a third of nonprofits are sitting idle during what we who grew up in the Mid-

west call harvesttime. Or as my Woody Hayes mixed metaphor of football and battle put it, when it's fourth and goal to go it's time to act!

​This seminar will equip you with the knowledge and practical skills needed to . . .

● Portray that conflict in vivid images in the context of a story plotted with a beginning, middle, and end

(If name on card or check is not that of participant(s), please email attendee list to Frank@NarrativeFundRaising.org)